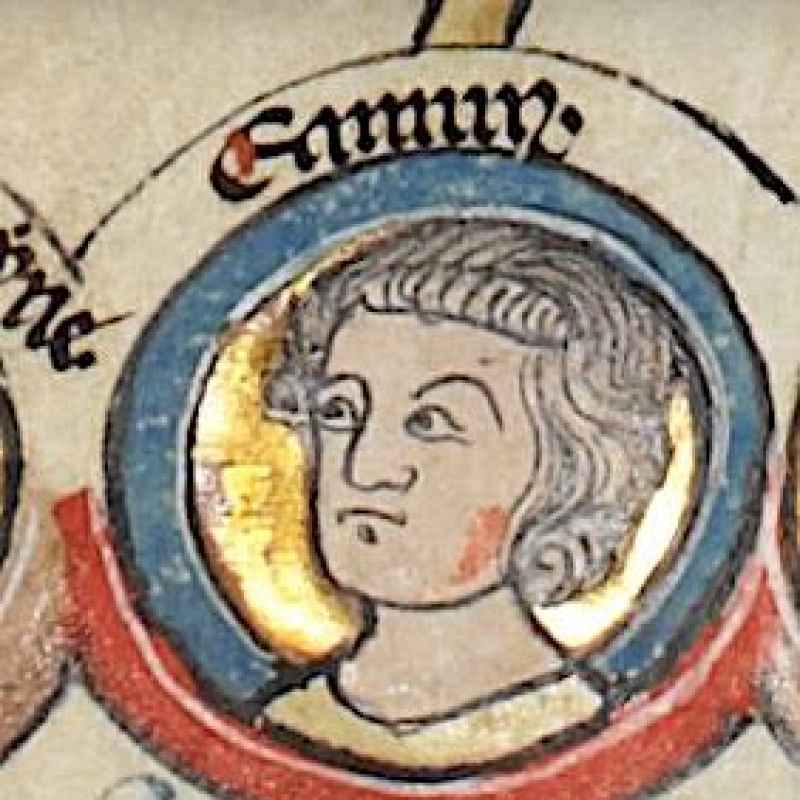 Born Berkhamsted December 1249. Died Ashridge 1300
Owner of Berkhamsted castle and the richest man in England in the last three decades of the thirteenth century

On the day after Christmas 1249, Sanchia, Countess of Cornwall, second wife of Henry III’s brother, Richard, Earl of Cornwall, gave birth to a son in Berkhamsted castle. The little boy was quickly christened Edmund (after the recently canonised Edmund Rich, who had been Archbishop of Canterbury from 1233 to 1240) by his uncle, Boniface of Savoy, Archbishop of Canterbury.

In 1257, his father, Richard, was elected King of the Romans, in effect the King of Germany with the possibility of being crowned Holy Roman Emperor. But Edmund was not his heir as another son, Henry, had been born fourteen years earlier to Richard and his first wife, Isabel Marshal. On his father’s election, Edmund and his family were in future known as ‘of Almain’ being the English rendering of the French name for Germany.

Details of Edmund’s childhood are few, but it was eventful. On at least two occasions, he visited Germany with his father and he was caught up in the Barons War which broke out in 1264. He was captured alongside his father at the Battle of Lewes on 14 May 1264 when the baronial leader, Simon de Montfort, won a stunning victory over Henry III. Edmund was imprisoned with his father, first at Richard’s own castle of Wallingford and later at de Montfort’s castle of Kenilworth. Whist in captivity, his aunt, Eleanor, the sister of his father and the wife of de Montfort sent gifts to him. When the Lord Edward, the King’s heir, escaped from captivity in Hereford, de Montfort ordered that Richard and Edmund should be put in chains. As Edmund grew to manhood, he went, in 1270, with his brother, Henry of Almain, to join the Lord Edward, on a crusade in support of his uncle, Louis IX of France. This ended in disaster with the King dying in Tunis but, of more impact on Edmund, his brother, Henry, was murdered by two sons of de Montfort whilst at mass at the papal court in Viterbo in 1271.

With Henry’s murder, Edmund’s life was totally changed. Returning to England, he was now heir to his father, the richest man in England, who died in April 1272. Edmund was now Earl of Cornwall and on 16 November, when the King died, his cousin Edward, was the new English monarch. From his father, Edmund inherited vast landed wealth. Not only was he Earl of Cornwall, which came with manors in both Devon and Cornwall, but he also inherited numerous other feudal honours, including that of Berkhamsted and Wallingford. In all he had lands in over 800 places in 27 counties and owned at least 14 castles. Based on his surviving accounts, estimates of Edmund’s annual income vary from £6,000 to £8,000, but these figures do not include repayments on loans that he had made (totalling over £14,000 in the 28 years that he was earl).

A major feature of Edmund’s character was his piety, which was far in excess of a nominal obligation. Whilst in Germany, in 1269, he discovered the Holy Blood relic at Trifels castle in Franconia. Although only a teenager, he brought it back to England where, a year later, it was installed in Hailes Abbey (the Cistercian monastery founded by his father and completed by Edmund). Veneration of this relic lasted until the Reformation and it was a focus for pilgrimage. In addition to his father’s foundations, Edmund created the College at Ashridge near Berkhamsted for the Bonhommes or Blue Friars in 1283. This was their first house in England and Edmund gave this new foundation part of the Holy Blood relic.

Edmund’s most significant service to the King began in May 1286 and lasted until August 1289 when he acted as Regent whilst Edward I was in Gascony. Whilst the realm was in his hands, Rhys ap Maredudd rebelled in 1287 and Edmund had to summon over 8,000 troops to deal with the crisis. A series of castles had to be recovered and the English suffered significant casualties at Dryslwyn when a mine under the walls collapsed.

Edmund’s final years were overshadowed nationally by the King’s troubles with Scotland and particularly his army’s disastrous defeat at Stirling Bridge followed by his recovery at Falkirk in the following year. At Christmas 1290 the King spent his first Christmas as a widower with Edmund at Ashridge. Whilst there, Edward summoned a meeting of Parliament which discussed the political situation in Scotland.  Edmund was summoned to serve in Scotland and to Parliament but he was also excused from attendance. Nevertheless, he continued to render service to the King by holding prisoners captured in the Scottish battles at Berkhamsted castle. The last time he might have seen the King was in April 1300 when Edward stayed at Knaresborough on his way north. Edmund died on 30 September or 1 October. He was buried on 29 March 1301 near his father and mother at Hailes Abbey in the presence of the King.

As Edmund died without any surviving children, his cousin, the King, was his next heir and the earldom and all of Edmund’s estates reverted to the crown. With only one exception, the title has remained in the royal family ever since.

An epitaph composed at Ashridge is full of praise for its founder. Edmund was described as “Sweet in utterance, just, pious and kind, prudent in counsel, worthy to manage the kingdom, through him flourishes the new order of Ashridge.”