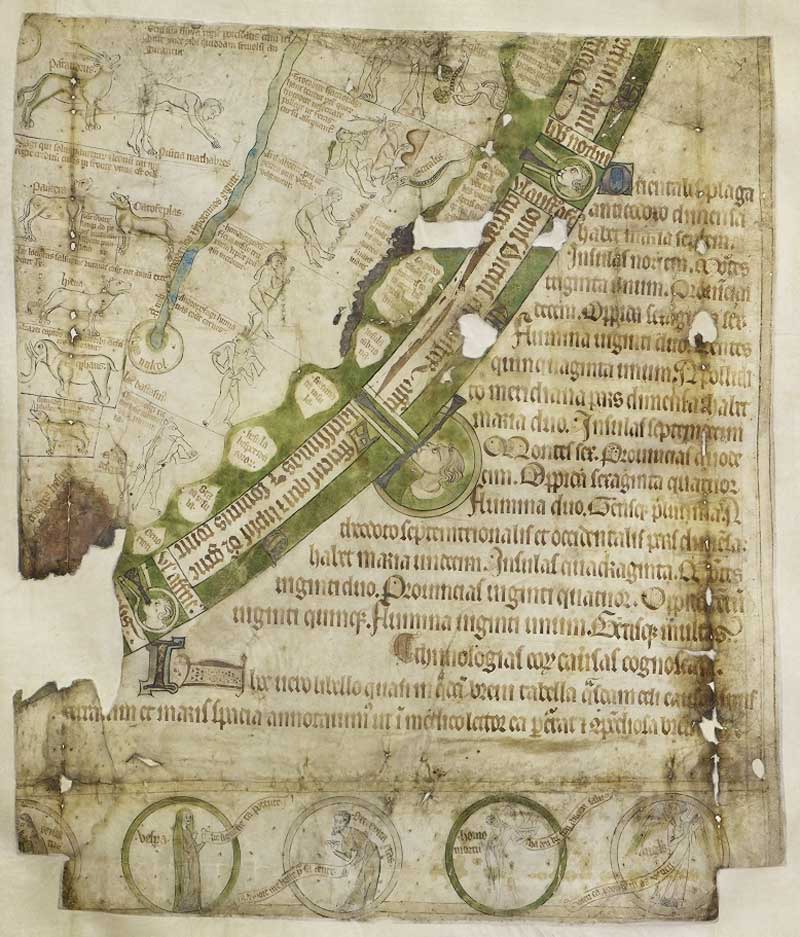 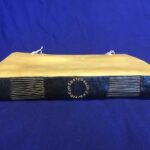 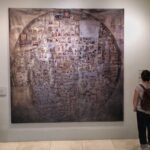 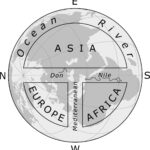 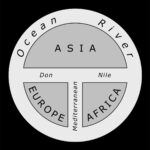 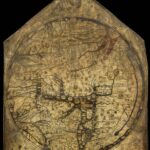 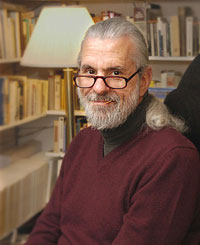 Dan Terkla is a medievalist and Emeritus Professor of English at Illinois Wesleyan University, where he taught from 1995 to 2018. Before that he was a member of the English Department at Dickinson College, in Carlisle, Pennsylvania. He received his Ph.D. in Comparative Literature and Medieval Studies from the University of Southern California (1992), his M.A. in Medieval Studies (1986) and B.A. in Liberal Studies and Comparative Literature (1979) from California State University, Long Beach. He was a Visiting Scholar at Balliol College, Oxford (1985-86), and wrote his M.A. thesis there under the tutelage of Elspeth Kennedy, St. Hilda's College, and Maurice Keen, Balliol College.

Maps, the Map, and the Fragment

The Duchy of Cornwall Map Fragment is all that remains of one of the grandest Anglo-French world maps made in the European Middle Ages. The fragment is so named, not because it is cartographically related to the southwestern English county, but because it is held in the Duchy of Cornwall Archives, belonging to the Duke of Cornwall: HRH The Prince of Wales, Prince Charles. Edmund of Almain, the most likely commissioner of the Duchy Map, was the second Earl of Cornwall, following his father: Richard, King of Germany (or of the Romans) and brother of King Henry III.

There were multiple types of medieval world maps (mappae mundi). The original Duchy Map was of the popular T-O type, which means that it showed in two dimensions what people understood to be the inhabitable part of the globe.

The round map (the “O”) had east at the top and was divided into three sections by waterways: the Mediterranean Sea, the River Don, and the River Nile. The two rivers made the horizontal bar of the “T” set within the “O,” and the Mediterranean its vertical bar. Each section was devoted to a landmass: across the top half was Asia, in the east; at bottom right Africa, in the south; and at bottom left Europe, in the north. Encircling the whole was the Ocean River mentioned by Classical authors like Homer.

These western European maps were Christian works of art made almost exclusively by men in religious houses. Consequently, a number of mappae mundi show Jerusalem at the very centre of the world. Some, like the Hereford Mappa Mundi (c.1300), include an image of the Garden of Eden near the top in the far east. We do not know if the Duchy Map was at all similar in this regard, but the conventionality of its fragment, which features part of Africa, suggests it might have been. Uniquely, the Hereford Map also presents the viewer with an image of the Crucifixion just above/east of Jerusalem and a rendering of the Last Judgment at its apex.

The Duchy Map was drawn, lettered, and illustrated by hand on a single, rectangular piece of vellum, or calf-skin. The pens, inks, and processes used to create it were the same as those used to make medieval manuscripts. The high quality of the work suggests that the map was made in a well furnished workshop (scriptorium) that made fine manuscripts. Edmund also commissioned a beautiful copy of a book (codex) by Peter Comester (“Peter the Eater”), the wildly popular Historia scholastica. Book and map were lettered by the same person and likely created in the same scriptorium. Westminster Abbey seems the logical location of their making.

The Duchy Map Fragment measures 62cm (24.4in) in height by 53cm (20.8in) in width. It is less than a quarter of a monumental mappa mundi that was almost certainly mounted on a wall.  The original’s circular world (its “O”) was approximately 158cm (62.2in) in diameter, and approximately 495cm (195in) in circumference. This means that it was considerably larger than the Hereford Map, the largest surviving medieval mappa mundi, which is approximately 159cm (62.5in) in height and 133cm (52.2in) in width. The Duchy Map’s diameter would have been some 25.4cm (10in) wider than the Hereford Map’s. Both would have been dwarfed by the Ebstorf Map (c.1300), the diameter of which would have extended an amazing 225cm (88.4in) beyond the Hereford Map’s and 199cm (78.3in) beyond the Duchy Map’s.

The Duchy Map was cut up between 1539 and 1550 and part of it, the fragment, made into loose binding material for Hemel Hempstead manorial records. The existence of a map within the binding  was noted within a Duchy office archival inventory made by Rollo Clowes in 1921. In 1986, the archivist Graham Haslam arranged for Don Gubbins of the Public Records Office to conserve the manorial volume. As he dismantled the sixteenth-century records book for conservation the full significance of the map was revealed. The rest of the map has not been located. The fragment is now cared for at the Duchy of Cornwall Archives in London, where it is accessible by scholars.

Edmund of Almain and the Duchy Map 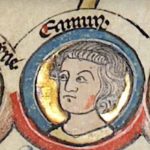 Circumstantial evidence points strongly to Edmund of Almain as the Duchy Map’s commissioner. Like his father, Edmund was the wealthiest man in England, perhaps in western Europe. He and his family lived in an age of royal spectacle. His uncle, King Henry III, engaged on a grand scale in an architectural and relic competition with King Louis IX of France. Henry’s rebuilding of Westminster Abbey, for instance, was a response to Louis’ building the stunning, jewel-like reliquary of Sainte-Chapelle, and he acquired a Holy Blood relic, in part to match Louis’. (Henry hoped, in vain, that his relic would make Westminster into a more popular pilgrimage site than Paris.) Henry’s brother, Richard of Cornwall, founded the Cistercian abbey at Hailes, and after Edmund endowed it with part of his Blood relic, it became a thriving pilgrimage site, mentioned by both Geoffrey Chaucer and Margery Kemp.

Edmund was a deeply religious man and a philanthropist who founded and supported a number religious houses. He also founded the College of Bonhommes in Ashridge, some three miles from his castle at Berkhamsted, in 1283. The Bonhommes were Augustinian canons who followed the rules of the Royal Abbey and School of St Victor in Paris. The abbey was well known as the home of Hugh of St Victor, whose mapping innovations inspired mapmakers in many English religious houses, including, for instance, Durham, St Albans, Hereford, and Westminster. Edmund had the Historia scholastica copy and the Duchy Map made in honor of the college’s dedication in 1286.

Grand mappae mundi were part of royal spectacle and were assertions of power, in this case, Plantagenet power. The Palace of Westminster had a “mappa mundi room,” and Henry III commissioned a large, mural mappa mundi for the palace’s Painted Chamber, where he held court. He had another mural world map made for his great hall in Winchester Castle, where he and Richard of Cornwall were born. The hall had a rota Fortunae (Wheel of Fortune) in the east gable over Henry’s table, and the map was set in the west gable over the door. Henry’s son and Edmund’s cousin, Edward I, also owned maps. Accounts of his Great Wardrobe contain ten mappa mundi references and name two, perhaps three, maps. Additionally, a Privy Wardrobe account from Edward III’s reign provides notice of a royal map given over “to the king’s use” in 1338. Edmund naturally spent time in London and Winchester and so would have seen the king’s maps and their effects on those admitted to his chamber.

There were also other, and more common, uses for mappae mundi. Much of the information on them derived from the Bible, writings of the Church Fathers, and Classical authors like Pliny. Consequently, maps and books in religious houses were complementary: books narrated the events of human history (historia) and named the places where that history took place. Maps illustrated that history and so were key aids to clerical teaching and learning, as they are today. Edmund surely knew this, and that is why he commissioned the Duchy Map and Peter Comestor’s Historia scholastica for use in his College of Bonhommes at Ashridge. They were a perfect match.

Although the Bonhommes would have benefitted from pairing the Duchy Map with the Historia, we might also consider its benefactor, Edmund of Cornwall, as map user. As noted above, he would have seen Henry III’s maps in situ and so in use. In Henry’s palaces, Edmund would have witnessed the role played by monumental mappae mundi in enhancing the king’s aura and, in so doing, learned about the maps’ religious symbolism and political power.

Edmund had little chance of ascending the throne, but his interest in spectacle and public image comes through in his expansive philanthropy. It is relatively easy, then, to see why he might have requisitioned the Bonhommes’ map for display when he was present in the great hall of his administrative centre and birthplace, Berkhamsted Castle. There, some three miles from Ashridge and seated before a mural image of the world, perhaps designed with his royal uncle’s in mind, Edmund would fully be a Plantagenet; son of Richard, King of Germany/the Romans; nephew of King Henry III; sometime regent of England; second earl of Cornwall; and the wealthiest man in England. 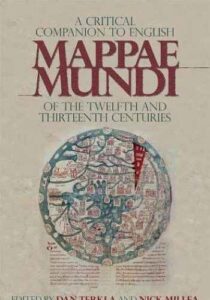 Mappae mundi (maps of the world), beautiful objects in themselves, offer huge insights into how medieval scholars conceived the world and their place within it. They are a fusion of “real” geographical locations with fantastical, geographic, historical, legendary and theological material. Their production reached its height in England in the twelfth and thirteenth centuries, with such well-known examples as the Hereford map, the maps of Matthew Paris, and the Vercelli map.

This volume provides a comprehensive Companion to the seven most significant English mappae mundi, surveying the maps’ materials, types, shapes, sources, contents, and uses in the medieval world. It also explores the shared history of map and book making in Britain before and after the Norman Conquest.

A chapter is devoted to each individual map, including the Duchy of Cornwall Map Fragment and the Hereford Mappa Mundi.

Dan Terkla is a medievalist and Emeritus Professor of English at Illinois Wesleyan University, where he taught from 1995 to 2018. Before that he was a member of the English Department at Dickinson College, in Carlisle, Pennsylvania. He received his Ph.D. in Comparative Literature and Medieval Studies from the University of Southern California (1992), his M.A. in Medieval Studies (1986) and B.A. in Liberal Studies and Comparative Literature (1979) from California State University, Long Beach. He was a Visiting Scholar at Balliol College, Oxford (1985-86), and wrote his M.A. thesis there under the tutelage of Elspeth Kennedy, St. Hilda's College, and Maurice Keen, Balliol College.