1856: Mechanics’ Fête
A Town Festival in the Castle Ruins 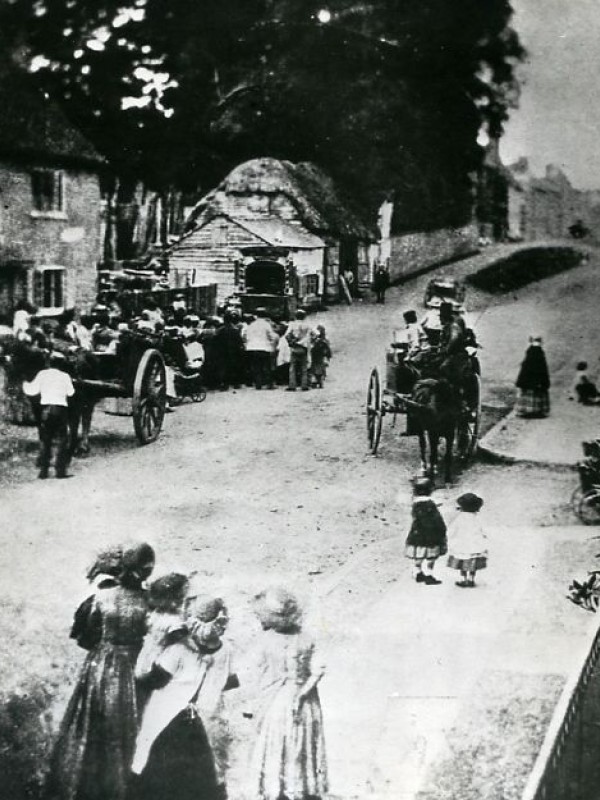 In the 19th and 20th centuries, the castle grounds played host to a number of public events. such as cricket matches, golf tournaments and shows. The Berkhamsted Mechanics’ Institute (1854-1993), a social and educational society, laid on an annual Mechanics’ Fête. These popular events were held in the castle ruins and the surrounding fields, and featured entertainments and games, attracting great crowds to the town.

This second annual gathering took place in the Old Castle grounds, which, from its shady walks, formed a most delightful place for recreation on such a day. The attendance of the inhabitants, both rich and poor, far exceeded that of last year. The railway alone brought upwards of 1,000 persons for the purpose of attending the fete.

In the meadow adjoining the Castle grounds we noticed the young and strong at the game of cricket; in another part of the meadow, in a dell which formed almost an amphitheatre, was a large ring staked out for jingling matches for the youngsters. Jumping in sacks, wheeling barrows blindfold, and a variety of other amusements also took place on the grounds. There was ‘Punch and Judy’ to amuse the children; and we think, from the patronage bestowed on ‘Mr. Punch,’ that children of all ages were highly amused with his performance. Tumbling also took place, under extensive patronage.

From what we saw, we are inclined to believe that the quadrille band, of Hemel Hempstead, had no sinecure that day. Their services were often in requisition, and the dance on the green sward seemed to be the order of the day, for never before in our lives had we seen so many standing up to dance at once. Another very pleasing feature was a splendid display of flowers, sent from the gardens of all the gentry in the neighbourhood.

The entrance this year was formed in the very place where royalty often, in olden times, had entered the castle, which, till this year, perhaps, had for centuries been closed; and, thanks to the exertions of Mr. Elliott, a very neat imitation of granite pillars was effected, with an arch on the top, on which was inscribed the word ‘Welcome.’

In the evening, the services of Mr. Mortram, the pyrotechnist, were called into requisition to provide a display of fireworks; and, in justice to him, we are bound to say that on this occasion he had exerted himself, for the devices were excellent, and all went off without a single mishap – giving universal satisfaction to upwards of 10,000 people who had assembled to witness them. Thus ended the fete to the satisfaction of all.