Home > History > Personalities of the Past > Biography: John Wolstenholme Cobb

Rev John Wolstenholme Cobb was a local clergyman and historian in the mid-19th century. His research into local history has provided us with much knowledge about Berkhamsted Castle.

A Yorkshireman by birth, Cobb first came to the Berkhamsted in 1853 as curate to St Peter’s Church. He became intensely interested in the history of his adopted town and carried out extensive research.

Cobb was an active member of the Berkhamsted Mechanics’ Institute, a social and educational society. In 1854 he gave two long lectures to the Institute on the history of Berkhamsted, and these were published the following year as the History and Antiquities of Berkhamsted.

His first lecture was wholly devoted to the history and construction of the Castle. In addition to his own lectures, Cobb included copies of many original documents with translations from the Latin in the appendices, among them the records of the Master of the Rolls under Edward III and an account of a visit to Berkhamsted Castle by the Archaeological Institute in 1873.

The History and Antiquities of Berkhamsted has provided us with a depth of understanding of Berkhamsted Castle and of the history of the town which has hardly been surpassed since. Cobb’s work is still widely respected today as a reliable historical source and is often referred to by researchers.

Cobb went on to become curate of St Mary’s Northchurch, and after some years away, returned to Berkhamsted in 1871 when he was appointed Rector of St Peter’s,  the first Rector to be appointed by the Earl Brownlow. He remained at St Peter’s until his death in 1883, and he was buried in Rectory Lane Cemetery. 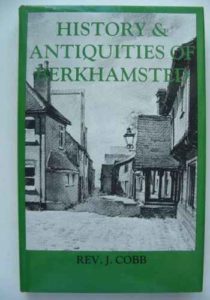