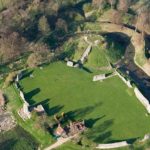 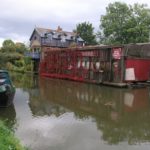 In the early decades of Britain’s Industrial Revolution, the construction of canals became a driving force for industrial development, criss-crossing Britain with man-made waterways that facilitated cheap transportation of coal, grain, building materials and agricultural produce.

Britain’s earliest canals were built by Francis Egerton, the 3rd Duke of Bridgewater and landowner of the Ashridge Estate. He commissioned the Bridgewater Canal in North-West England (opened in 1761), earning him the nickname of the “father of British inland navigation”.

However, the canal through Berkhamsted was not built by the Duke of Bridgewater, but by the Grand Junction Canal Company over 30 years later. Led by civil engineers William Jessop and James Barnes, the company drove a new canal between the Midlands and London, passing through Berkhamsted. The Berkhamsted section of the Canal was opened in 1798.

Following the course of the River Bulbourne, the canal passed right in front of Berkhamsted Castle. A small industrial area flourished around the area between Ravens Lane and Castle Street, attracting thriving businesses such as timber yards, breweries and boat-building, and it became known as “Castle Wharf”, or the “Port of Berkhamsted”.

Peacock & Willetts boat-builders launched their first craft in 1801, a river barge named Berkhamsted Castle. This was that start of a thriving business and the first of 60 canal vessels to be built in Berkhamsted over the next 125 years. Coal deliveries at Castle Wharf also made it possible for the Great Berkhamsted Gas, Light & Coke Company to set up business on Water Lane in 1849, providing the first gas lighting for the town streets.

From 1838, competition from the new railways brought about the demise of the canal system as a mode of freight transportation, and boat-building came to an end in Berkhamsted in 1910.