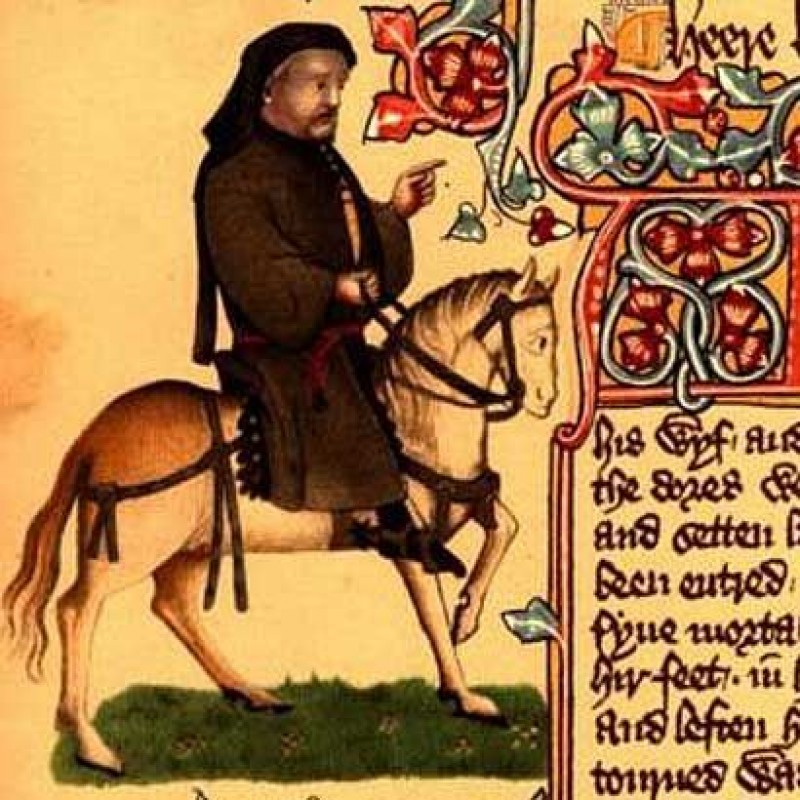 “In 1359 Chaucer saw military service in France, probably with Prince Lionel’s company, possibly in the division of Edward, the Black Prince. He was at the town of Réthel, near the city of Rheims which the Black Prince was besieging at the end of 1359 and the beginning of 1360. At some point in this campaign he was captured, but was released by 1 March 1360 (with the king making a contribution of £16 towards his ransom). In October of that year he is recorded as carrying letters (of an unspecified nature) to England.”
(Douglas Gray, Oxford Dictionary of National Biography, 2004).

In 1389 Geoffrey Chaucer was appointed Clerk of the Works at Berkhamsted Castle and other royal properties. It is not known how much time he spent at Berkhamsted, but…

… there appears to have been a genuine dissatisfaction with the way in which he had performed the duties of the comptrollerships… His duties are minutely stated in the patent. Fortunately for the poet, he was permitted to execute them by deputy. In July 1390 he was ordered to procure workmen and materials for the repair of St. George’s Chapel, Windsor, and also made a member of a commission to repair the Thames banks between Woolwich and Greenwich.
(Dictionary of National Biography, 1887, vol. 10, p.165)

One incident of his personal life at this time is preserved. On Tuesday, 9 Sept. 1390, he was ‘feloniously despoiled’ twice in one day, at Westminster of 10/. by one Richard Brerelay, and at Hatcham of 9l. 3s. 6d. by that same Brerelay, along with three others. Probably enough Chaucer was going from Westminster to Eltham. It was at the ‘fowle’ oak at ‘Hacchesham,’ a little to the west of New Cross, that he fell among thieves the second time. The writ, dated Eltham, 6 Jan. 1391, discharging him for repayment, speaks of the whole robbery as perpetrated at ‘le fowle ok.’ It adds that his horse was also taken from him ‘et autres moebles’ (see Mr. Walford D. Selby’s Robberies of Chaucer, Chaucer Soc. 2nd ser. No. 12).

So Chaucer was feloniously despoiled (‘felonice depredatus fuit’) of £20 ‘apud le foule Oke,’ wherever that might have been, on the third day of September in the 14th year of Richard the II. (1390)! And the King, of his special grace, forgave the said Geoffrey, clerk of his works, the repayment of the said sum of £20, by writ of privy seal dated the 6th of January, 1391, directed to the treasurer and barons of his exchequer. This appears from the enrolment of the poet’s accounts as clerk of the King’s works at the Palace of Westminster, the Tower of London, the Castle of Berkhampstead, &c., from July 12, 1380, to June 17, 1391, in the Public Record office (just copied from Mr. Furnivall), which enrolment also contains a curious list of the dead stock (‘mortui stauri’) or utensils in the different palaces, &c., received by Chaucer, and given out by him, or handed over by him to his successor, John Gedney.

In the Dictionary again…

In January 1391 he nominated John Elmhurst to be his deputy in the clerkship. Then came trouble again. In September we find one John Gedney holding the place that has been given to Chaucer. Of the cause of this supersession nothing whatever is known. It certainly looks as if Chaucer did not succeed as a man of business.

For his much more successful career as writer and poet, Chaucer certainly knew John of Gaddesden, who lived in Little Gaddesden near Berkhamsted, the model for his Doctor of Phisick in ‘The Canterbury Tales’…

With us ther was a DOCTOUR OF PHISYK,
In al this world ne was ther noon him lyk
To speke of phisik and of surgerye;
For he was grounded in astronomye.
He kepte his pacient a ful greet del
In houres, by his magik naturel.
Wel coude he fortunen the ascendant
Of his images for his pacient.
He knew the cause of everich maladye,
Were it of hoot or cold, or moiste, or drye,
And where engendred, and of what humour;
He was a verrey parfit practisour.”
(Chaucer, General Prologue, p.11).