Adrian Barham, chairman of the Berkhamsted Castle Trust, said: “We are immensely proud to be supporting this campaign because the castle is a place of national importance and it is vital we keep it looking its best. While most people take their litter, we do have a hardcore that do not and leave things like take-away coffee cups, ice cream wrappers and things that are capable of being taken home.”

Volunteers tackled all the accessible areas of the Castle site and the roadsides around the perimeter of the Castle and collected 10 of sacks of rubbish and recyclables, as well as the plastic bumper and valance from a car which had been dumped!

Further litter picking will happen at a later date on the less accessible parts of the site — in particular the moats and the areas with deep vegetation, which could not be reached safely by volunteers.

The Great British Spring Clean 2021 is an initiative of Keep Britain Tidy. 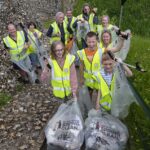 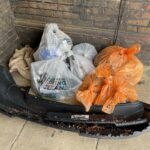 10 sacks of rubbish and a car bumper! 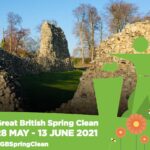