A town pageant is held to mark the 900th anniversary of the Norman Conquest. Local people act out episodes in history, including the crowning of William the Conqueror, the siege of the castle. the Battle of Berkhamsted Common, and the visit of King Louis XVIII’s of France, 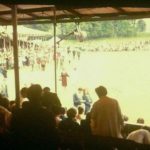